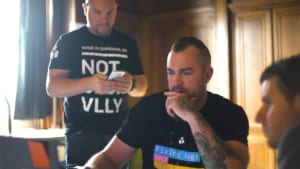 The idea for Fasetto didn’t originate in Wisconsin, but the file sharing company’s success did.

Fasetto, a Wisconsin-based startup, is dedicated to closing connectivity gaps through its powerful hardware and software solutions. The industry leader’s agnostic operating system allows users to easily access their content, empowering them to view and share with others regardless of platform, device or connection type.

Looking to launch a company of his own, CEO Coy Christmas floated the idea past his wife, who suggested the pair move from their Florida residence to her hometown of Superior. While developing education software, Christmas discovered the need for a place to store communications among students, teachers, parents and administrators, and Fasetto officially launched in 2013.

“Being here has allowed us to cultivate all the people that work for us now and to make it a better company,” said Christmas. “We’ve been able to pull people from the area that are extremely smart and unify our goal.”

Born out of a Kickstarter campaign that raised $150,000 from 200 backers, the startup looked to WEDC when it came time to attract additional funding. Certification through WEDC’s Qualified New Business Venture (QNBV) Program helped bring investors to the table, and to date Fasetto has raised $7 million from Wisconsin investors through QNBV.

“You would not think that there is a lot of capital in Wisconsin because of the stereotype that it’s a lot of dairy and farmland, and that people are more focused on agriculture than they are on technology,” said Christmas. “But you’d be amazed how many people actually have the capital to invest in companies like ours in Wisconsin. They’re literally around every single corner.”

These investments have allowed the company to launch in-house hardware and software solutions like Link, a storage and communications device powered by Samsung technologies that became available to consumers in 2017. It combines the capabilities of an LTE hotspot with the large storage capacity of a Network Attached Storage unit in a pocket-sized, weatherproof device.

“We started off in a corner office, and now we have 18,000 square feet of people on two floors in a building,” said Christmas. “In four years, we’ve grown from three people to 42.”

Fasetto has also launched Forum, an all-in-one presentation-sharing device specifically designed for conducting meetings, and will launch its developer kit for the Gravy OS in mid to late 2019.