Reach your markets. Find your success In Wisconsin®.

We Speak Your Language

ALL ROADS LEAD TO WISCONSIN

One of Wisconsin’s strongest advantages is our central location, uniquely positioned for delivering products to U.S. markets within a single business day. To see how our state’s location and robust infrastructure positions companies to do business on a global scale, explore the interactive map below. 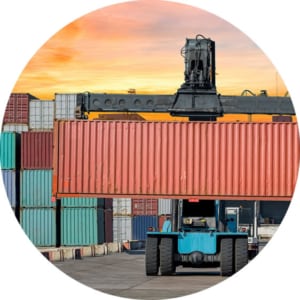 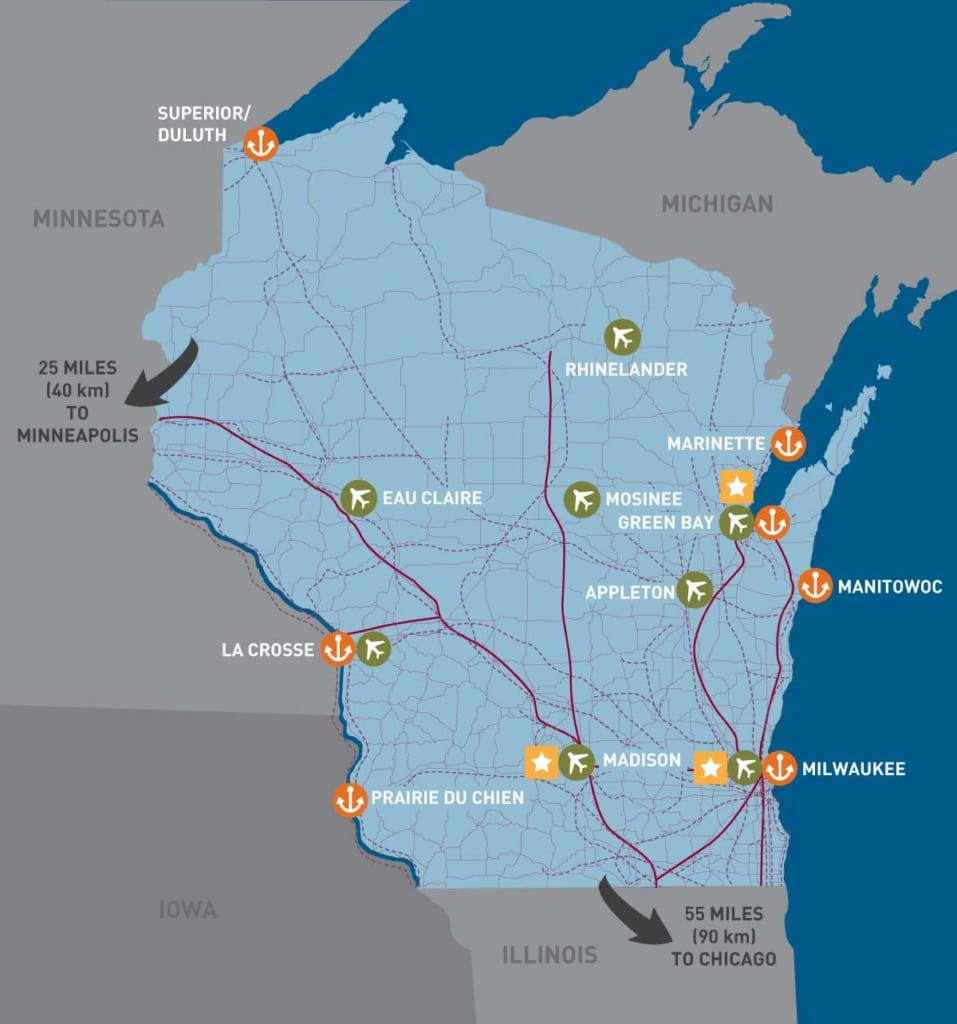 Wisconsin’s extensive transportation network relies on nine major highways covering more than 11,800 miles (18,990 km) to move our goods to market and connect us to major industrial cities throughout the Midwest.

Rail traffic throughout Wisconsin continues to grow, moving more than $122 billion in freight each year and creating a seamless link to the nationwide intermodal system.

Uniquely situated on some of the nation’s greatest waterways, Wisconsin ships 40 million tons of freight each year. Commodities travel to and from our commercial cargo ports along the Mississippi River, Lake Michigan and Lake Superior.

Throughout Wisconsin, air traffic takes off from eight commercial airport locations, linking us to every point in the nation within one business day.

An FTZ is created when goods are imported into a U.S. location, but are ultimately destined for a foreign market; either as-is or after some value has been added. Manufacturers operating in or near one of Wisconsin’s three FTZs can benefit from the deferral, reduction or elimination of taxes on their imported goods. 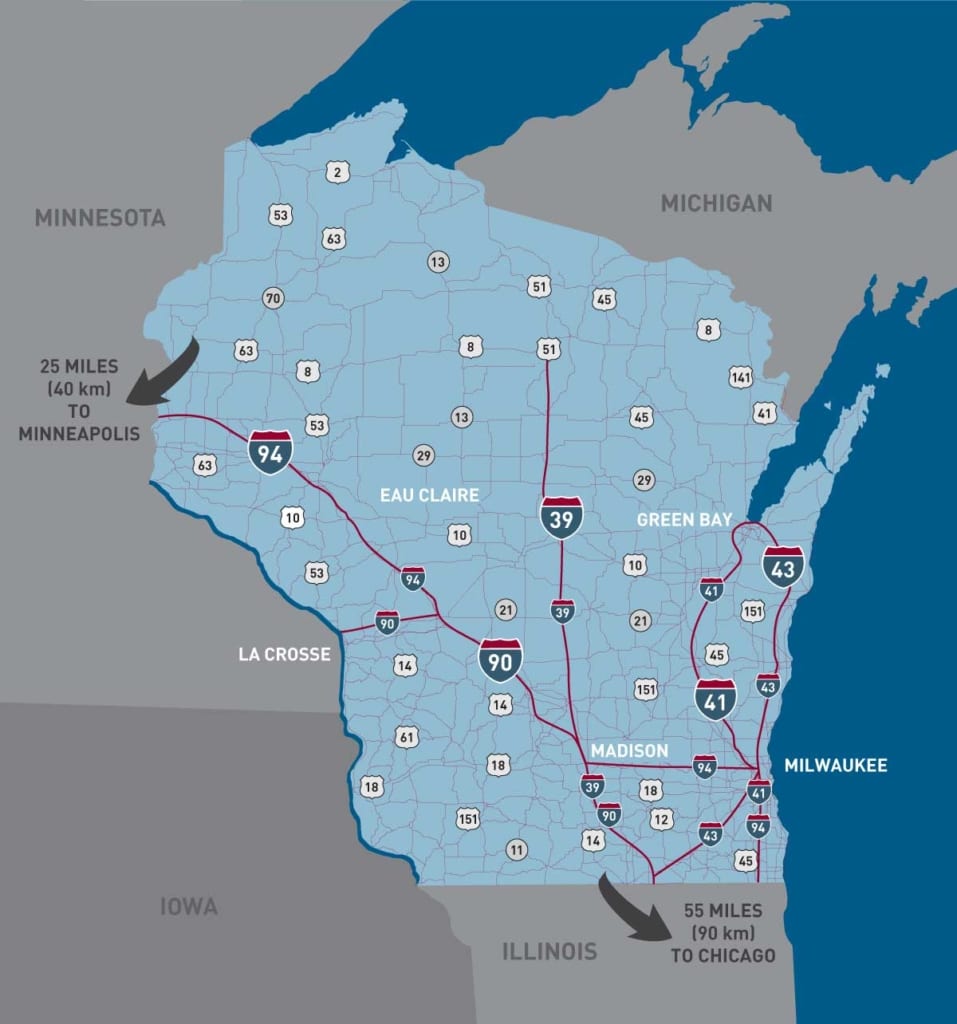 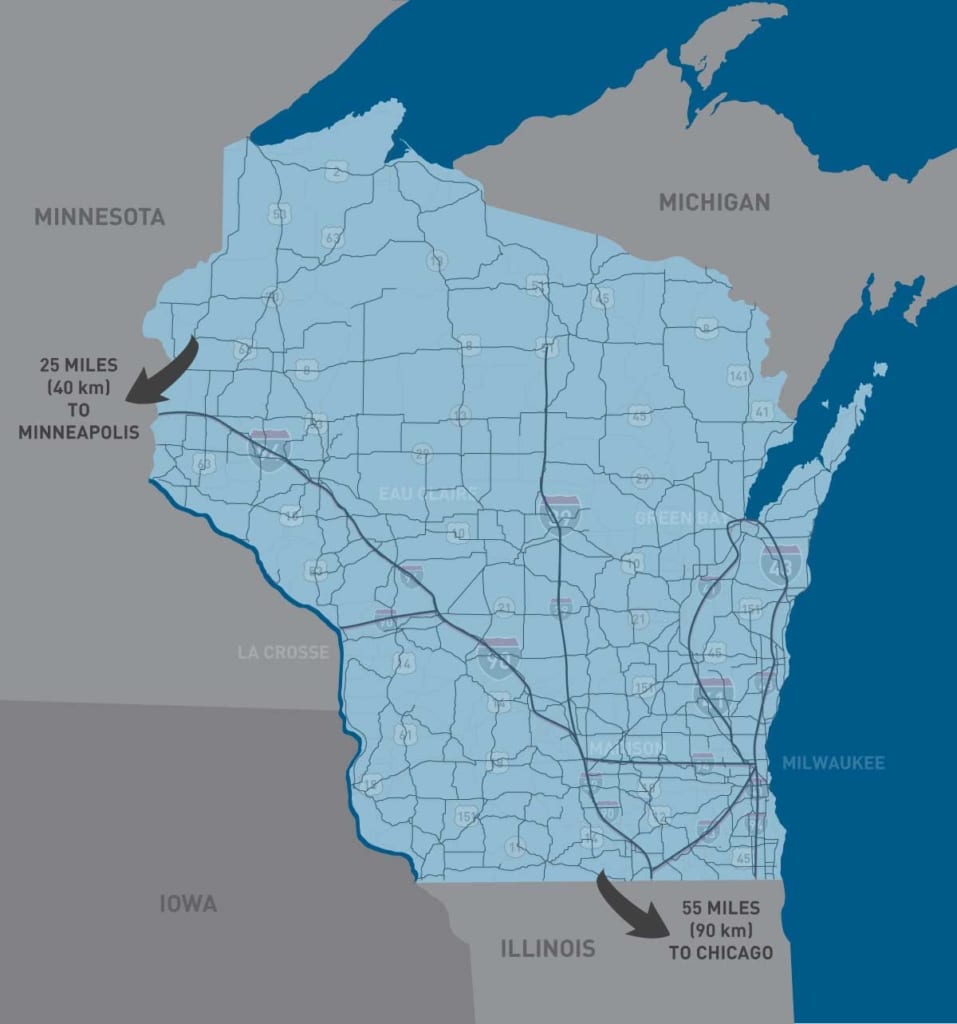 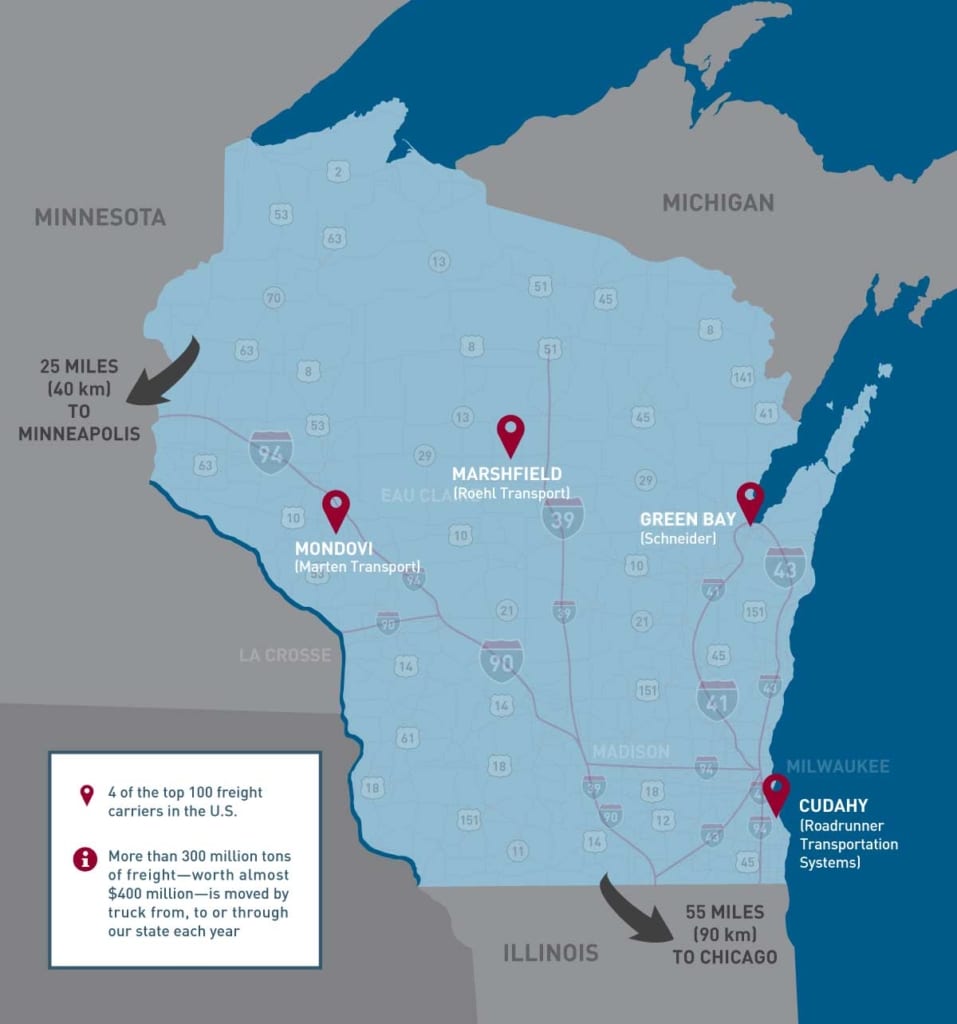 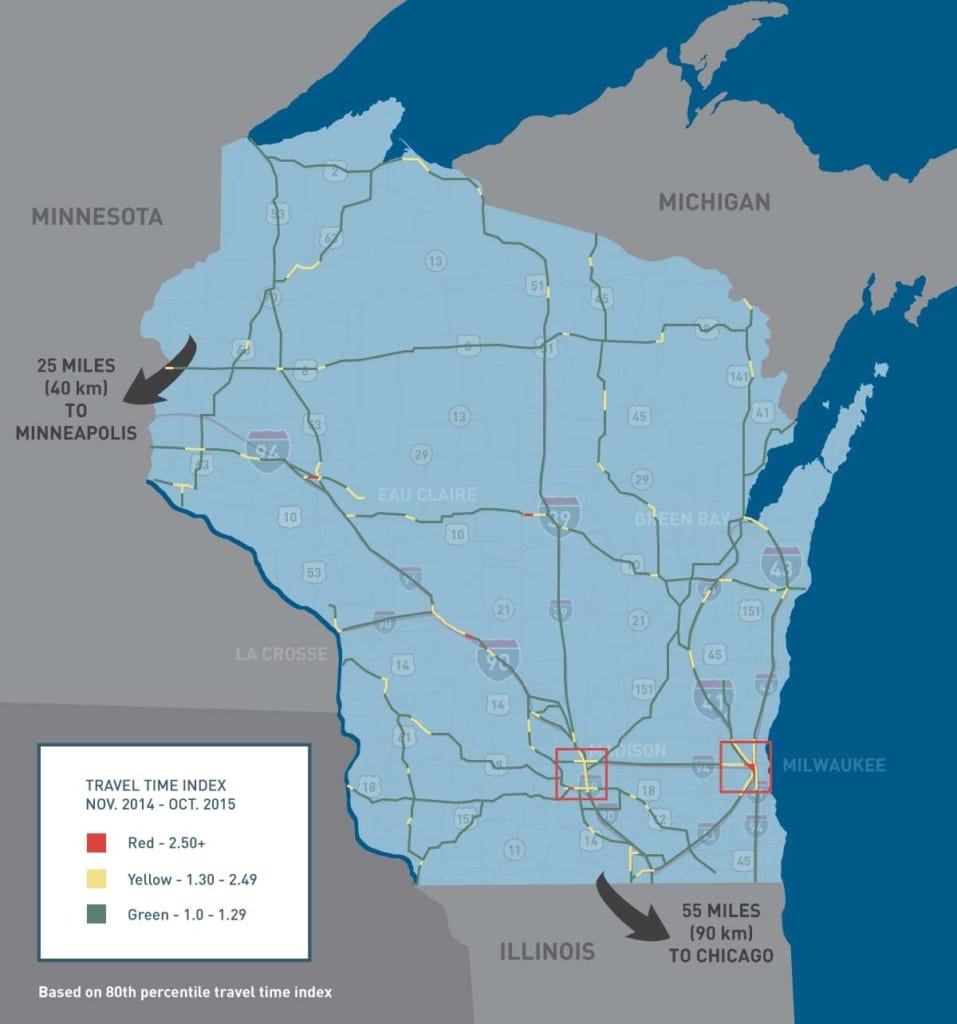 In Wisconsin, we’re committed to maintaining a reliable, efficient and connected highway infrastructure. From inclement weather and hazardous freight to oversize and overweight loads, we are well equipped to keep freight moving on our high-performing roadways.

Whether traveling for business or moving product by ground, you’ll appreciate Wisconsin’s proximity to major markets—and the money you’ll save on freight costs and travel times.

From 2011 to 2015, Wisconsin spent nearly $7 billion to maintain and improve the infrastructure of our roadways.

Wisconsin’s highway network includes and connects to some of the most robust freight corridors in the nation. Because our extensive network links class I railroads, commercial ports and airports together—and because our unique location provides quick access to major U.S. and Canadian markets—we move a significant amount of cargo in, out of and through our state. 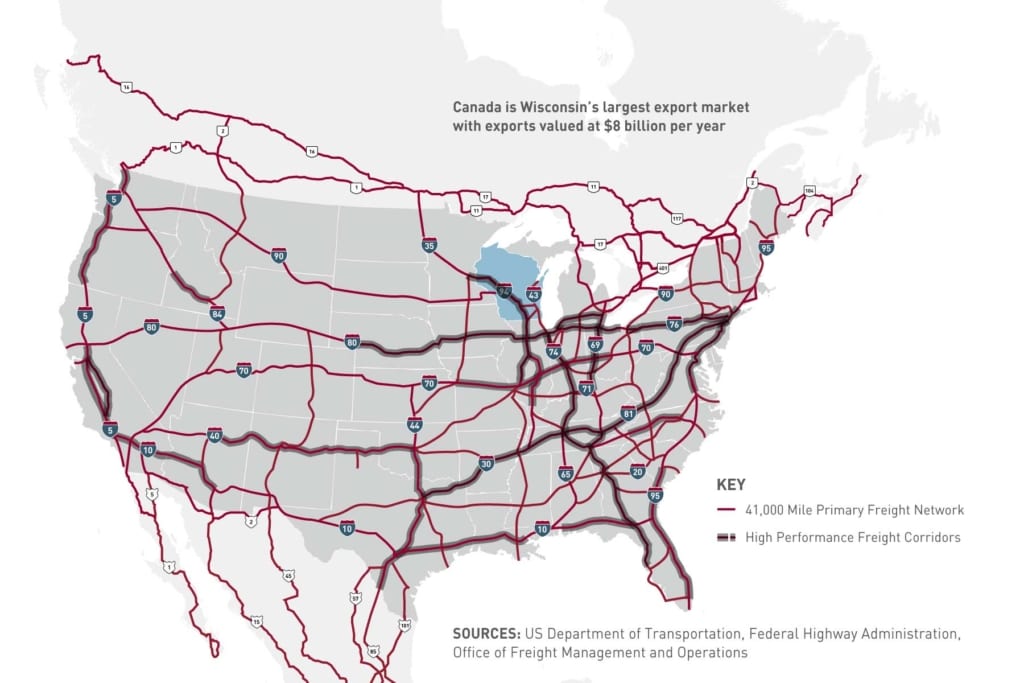 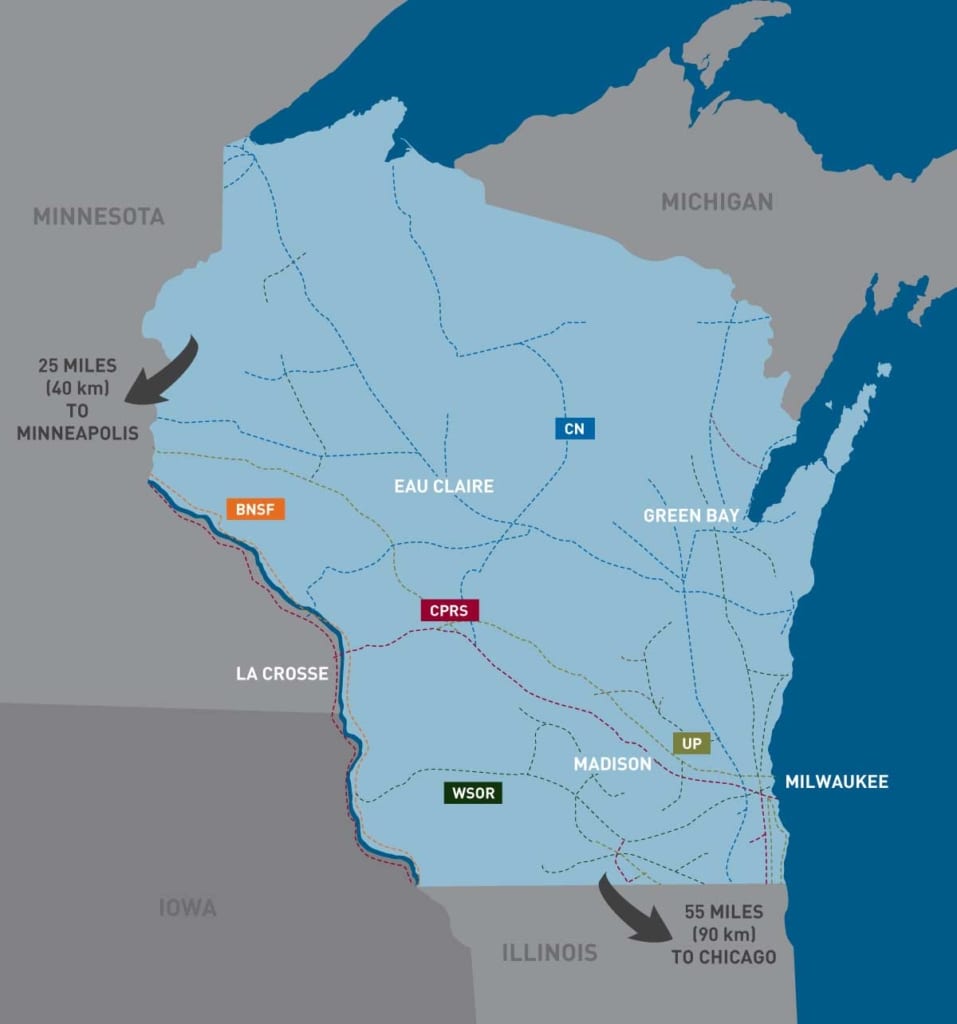 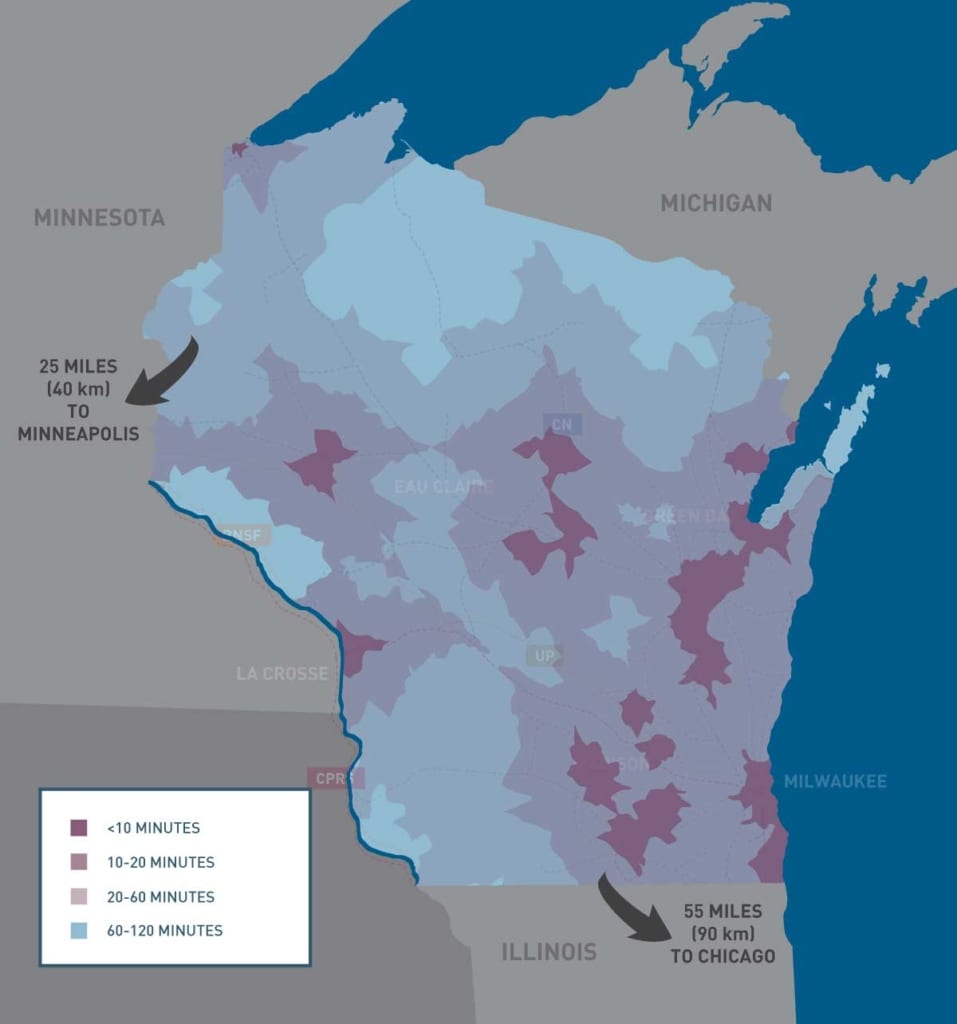 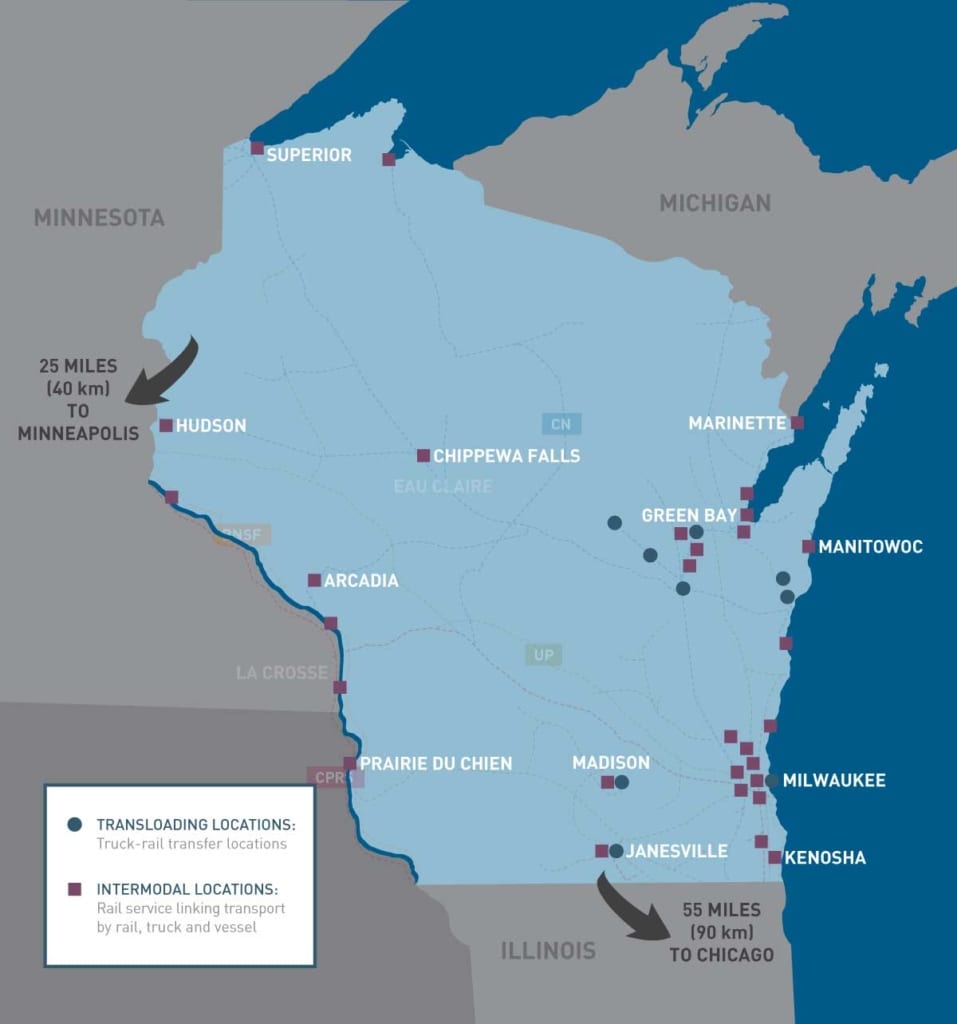 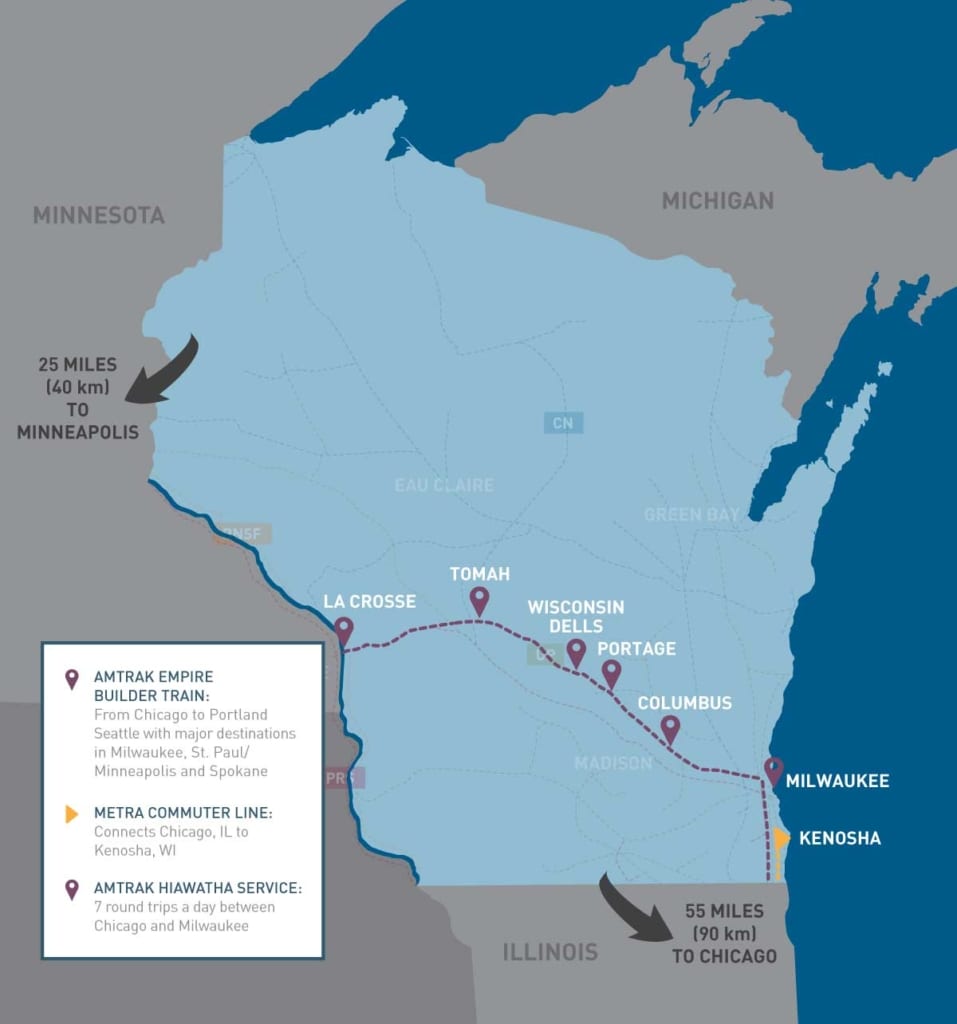 ​Wisconsin railroads give companies fast and flexible access to and from any location. Our rail lines provide trucking and marine shipping services that carry freight—from raw materials to component parts to finished goods—throughout North America and the world. In 2013, 3.2 million carloads transported 207 million tons of freight on Wisconsin’s railroads.

​Freight isn’t the only commodity that moves on Wisconsin railroads. Amtrak ridership had nearly 800,000 passengers in 2015.

From 2010-2014, the state and its local counterparts invested more than $132 million in our railroad infrastructure.

Railroads running through, to and from Wisconsin serve major markets in the United States, Canada and Mexico. Service from every part of the state supports international trade with shipping lines to and from any destination worldwide. Plus, our unique location means faster transportation to Asia via the Port of Prince Rupert, as well as to Vietnam, India and Europe via the east coast. 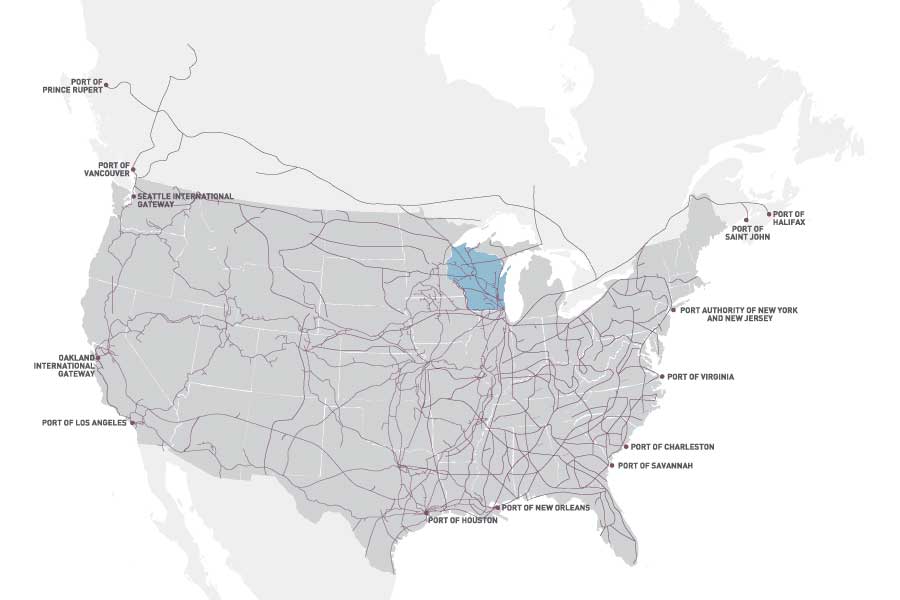 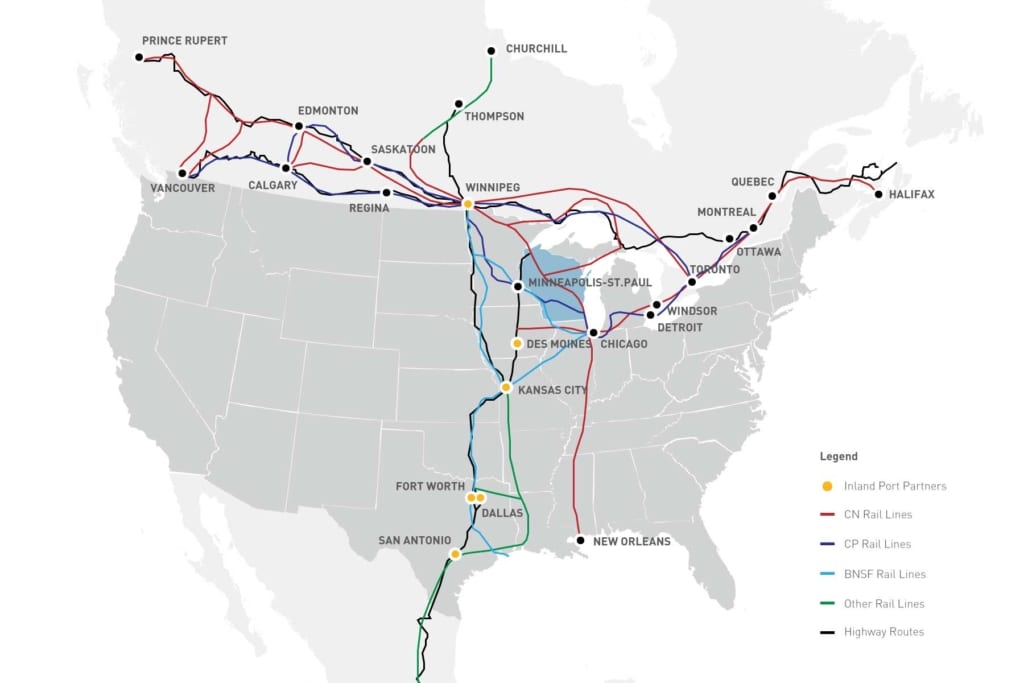 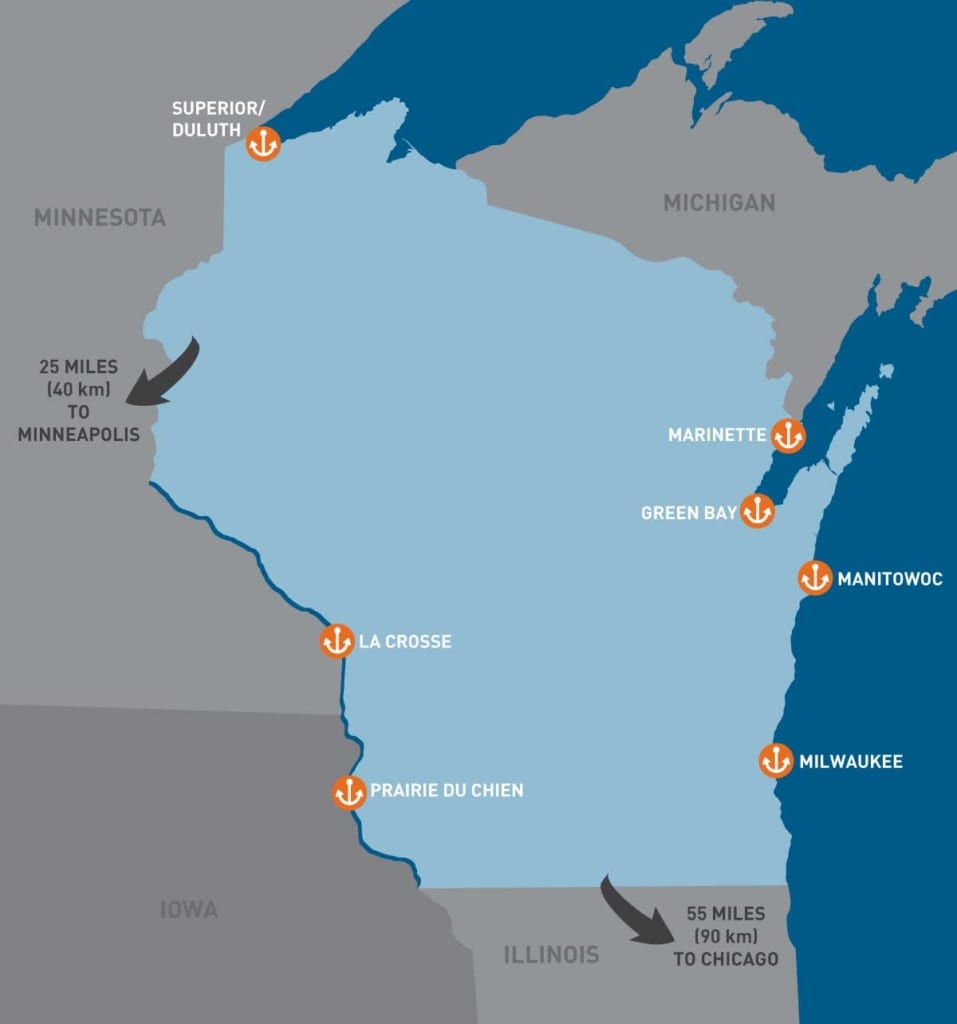 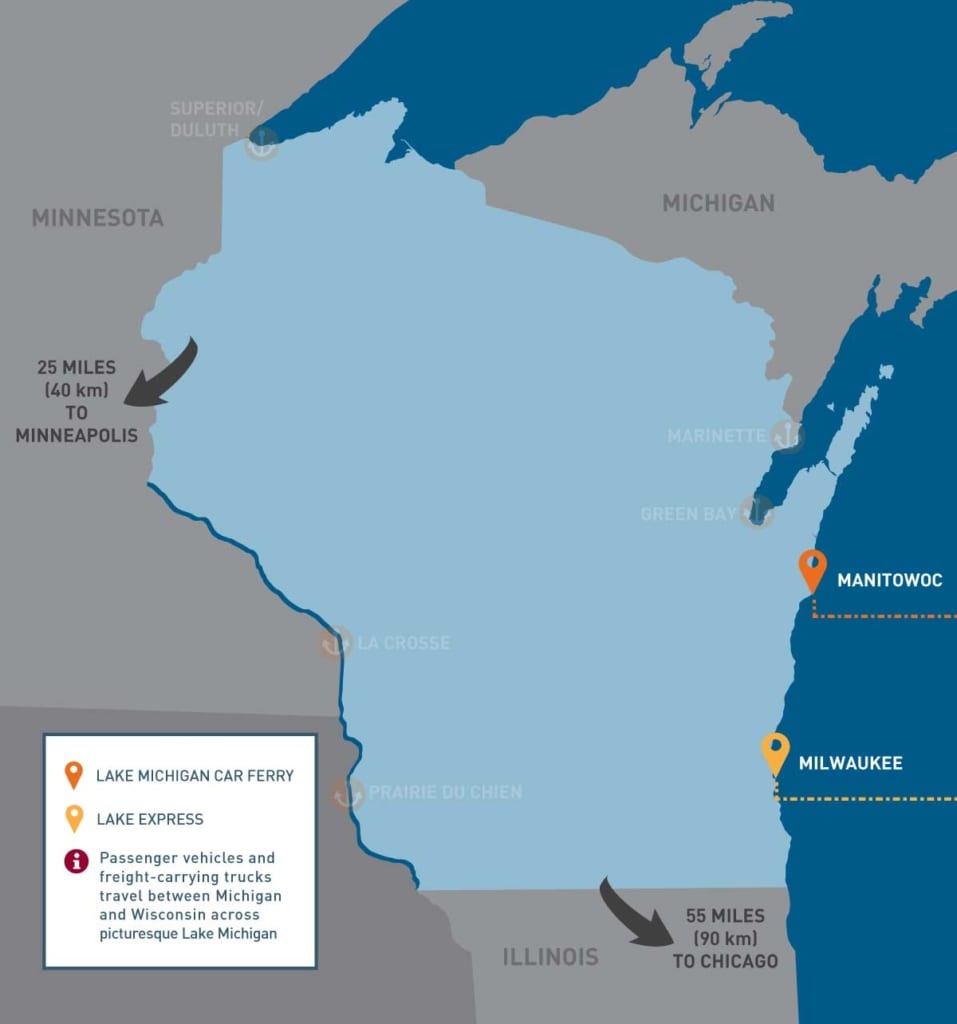 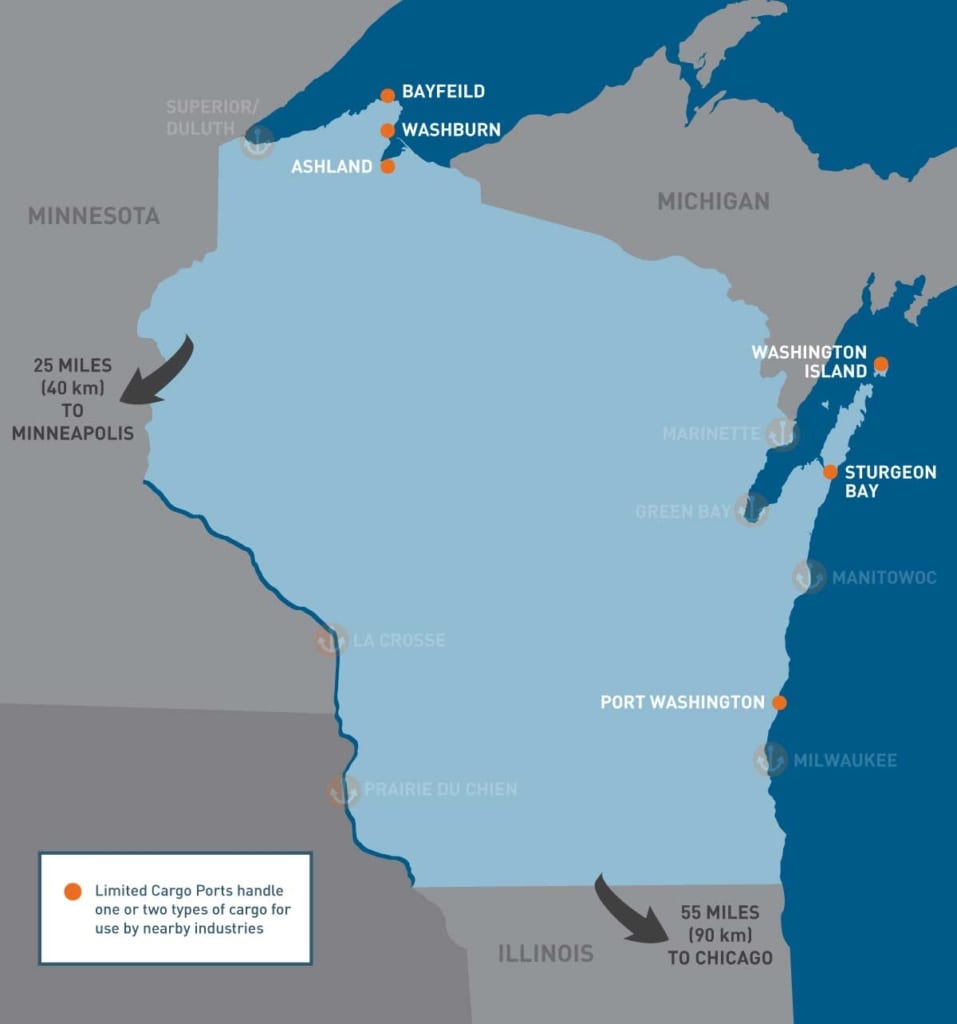 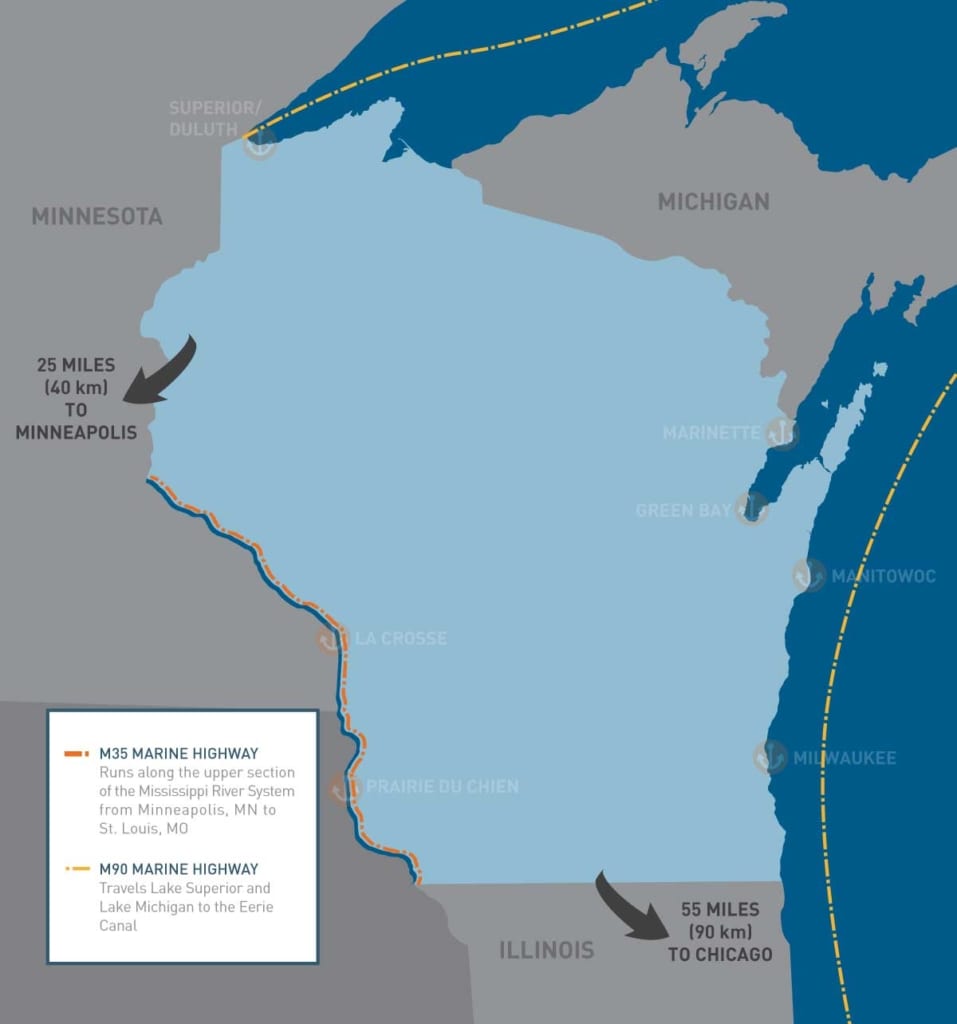 Wisconsin’s port history is as rich as the state itself. Early settlers realized the potential of the state’s commercially navigable waterways—two of the Great Lakes and the Mississippi River—and we have not since forgotten it. With seven commercial cargo ports and six limited cargo ports, Wisconsin has access to international waterways along three of its borders.

Water transportation is still the most efficient method for moving bulk commodities. Each year, Wisconsin ports handle over 40 million tons and $8 billion of cargo—much of it traveling to and from international markets.

The Wisconsin Department of Transportation invested $52 million in our waterway infrastructure from 2010 to 2015 through the state’s Harbor Assistance Program.

Wisconsin’s waterways connect the heartland of the U.S. and Canada to the rest of the world. Our commercial ports access the Erie Canal via the M90 Marine Highway, the Atlantic Ocean via the Great Lakes-St. Lawrence Seaway, and the Gulf of Mexico via M35 and the Mississippi River System. And because water transportation is still the most efficient method for moving bulk commodities, Wisconsin businesses have tremendous opportunity for international trade. 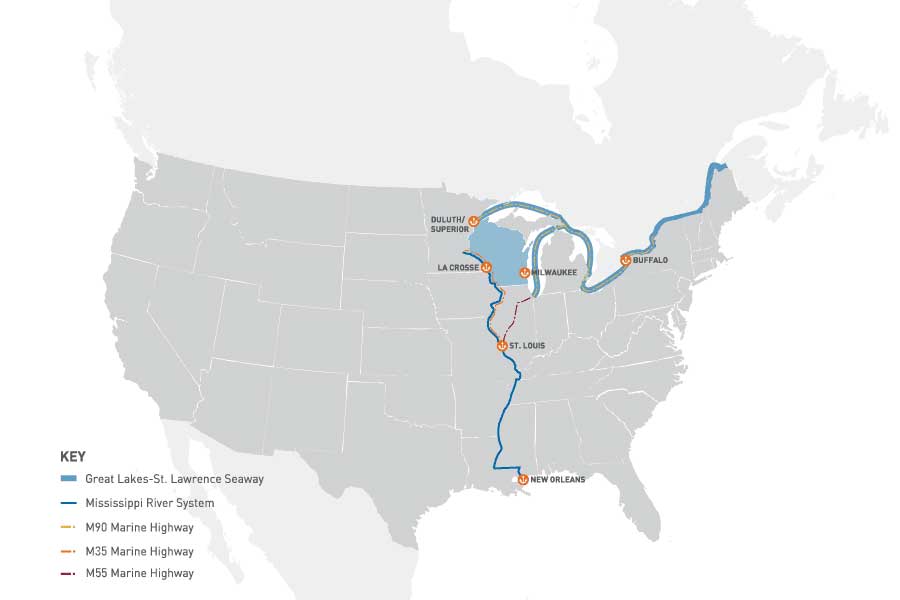 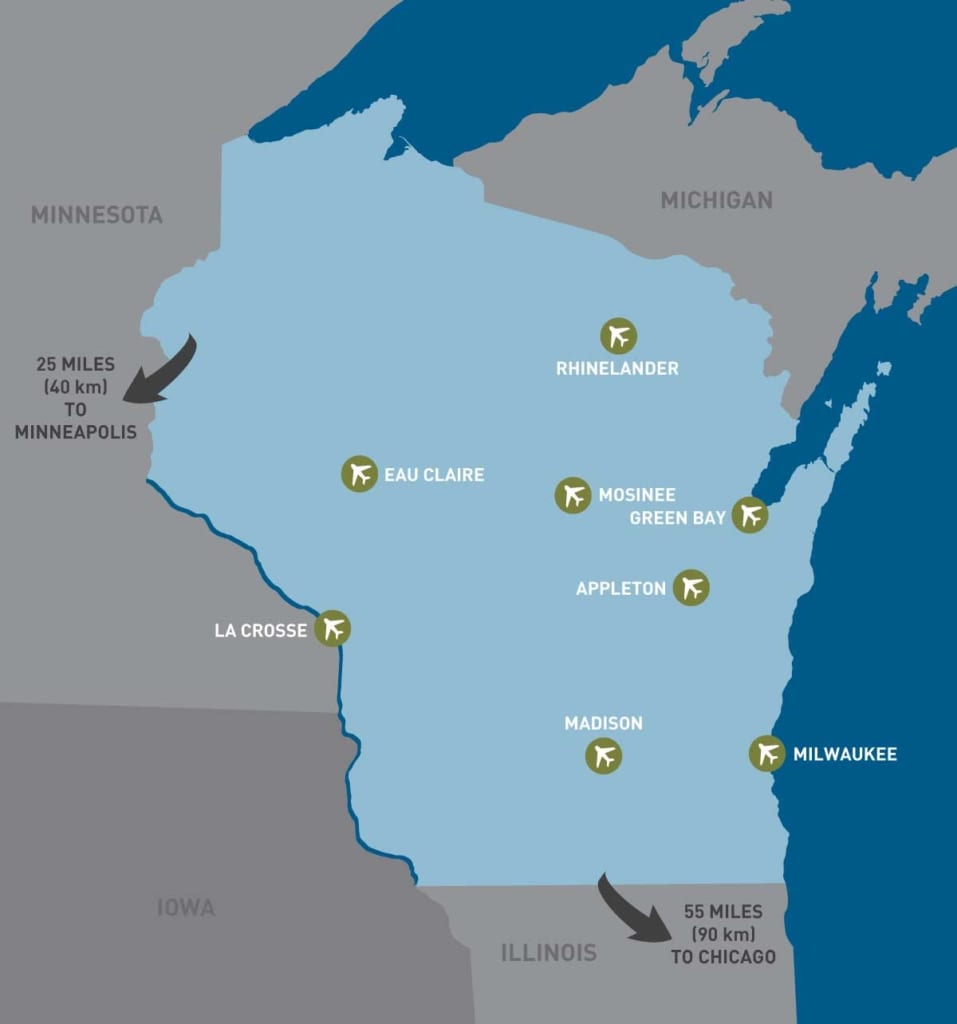