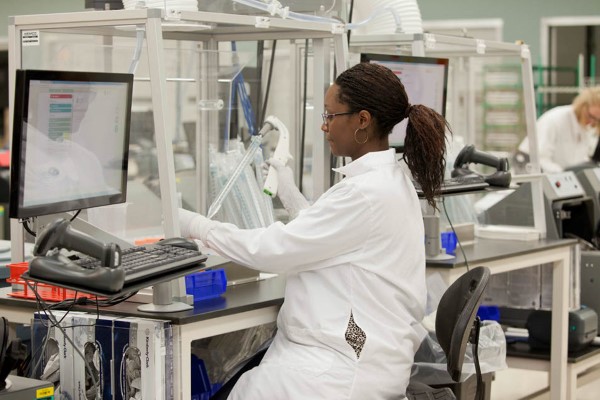 Among the Wisconsin companies to appear on the Deloitte Fast 500 list is Exact Sciences of Madison.

Four Wisconsin companies appeared on the 2019 Deloitte Fast 500 list ranking of the fastest-growing technology companies in North America. The rankings were calculated using revenue growth from 2015 to 2018.

Highest on the list was SwanLeap, a developer of shipping logistics software. After debuting in the top spot on the 2018 list with 77,260% growth over four years, the Madison-based company ranked 15th overall in 2019, with a still-impressive growth rate of 6,383% from 2015 to 2018. Also a Wisconsin Inno 50 on Fire 2018 winner, Swan Leap uses machine learning to help companies manage shipments and increase control over their supply chain.

Also making a repeat appearance is Madison’s Exact Sciences. The maker of the Cologuard colorectal cancer test has appeared on the Fast 500 list since 2016, and in 2019 the publicly traded company ranked 117th. Only 24% of the companies on the 2019 list are publicly traded, and only 11% are in the biotech/pharmaceutical sector. Average growth for the list’s biotech companies was 405%; Exact Sciences grew 1,052%.

Two other Wisconsin companies appeared on the list for the first time in 2019. EyeKor provides clinical trial image and data management solutions for the medical device, ophthalmic and therapeutics industries. The Madison-based company grew 350% over the past four years and recently announced its expansion to China.

The other Wisconsin debut, posting 192% growth, was Waukesha’s Intelligent Video Solutions, a maker of video observation and recording software for the health care, research, institutional and corporate sectors.

The list includes software, media, telecommunications, life sciences and energy technology companies from more than 40 states and provinces across North America. Companies on this year’s list saw growth ranging from 166% to 37,458%. SwanLeap and Exact Sciences are two of only 125 companies that saw growth rates over 1,000%.