The idea was simple: create a way to connect entrepreneurs with funding, and in the process, help them get comfortable with pitching their concepts to the world. 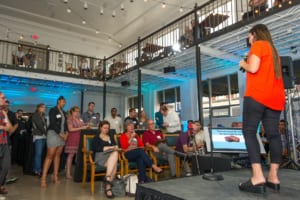 Simple, but effective. That’s why Hatch events have gotten off to a strong start since launching in April 2017, says Jeremy Fojut, chief idea officer and co-founder of NEWaukee, which created the series with the BrightStar Wisconsin Foundation.

The Hatch events focus on taking ideas to project or project to companies.

“Basically, pre-investment ideas pitch for resources, but what happens at a Hatch event is more than money,” says Fojut. “Entrepreneurs have been connected to funders, people that can connect them to other people to bring their ideas to life. The community has come out in droves to support their ideas much like they would support a sports team, entrepreneurs have connected with each other to build peer networks and they can validate their ideas and get the word out for potential customers.”

In many ways, Hatch is an outgrowth of the same need that led to the creation of NEWaukee. That organization was founded in 2009 by a group of new college grads who were also fresh to Milwaukee and looking for ways to socialize and explore the city besides traditional business-networking events. In short, they wanted to create common ground for creators that allowed for business growth while fostering friendships and getting to know their new home.

“The primary impact has been bringing community organizations, entrepreneurs, universities and businesses together to work across county lines and create a ‘we are all in this together’ approach to creating new economies, new forms of economic development and bringing ideas to life,” says Fojut.

That’s the beauty of Hatch. No matter how sound the idea, if an entrepreneur can’t connect with outside funding early on, he or she is going to struggle to build a concept that can then secure additional resources, such as money, incubator space and other core business development needs.

So Hatch steps into the role of booster: Those who wish to present have five minutes for a pitch that’s made in front of judges as well as a live audience, who then choose one idea to receive $2,000 and advance as a semi-finalist to one of Hatch’s three regional finales this fall. Winners there will pitch at the Hatch finale for a chance to win $5,000 cash as well as other business services. There’s no restriction on idea type but concepts should be high-growth and scalable.

Hatch also provides value as a robust networking opportunity. Presenters spend time not just with judges, but also audience members who are likely also startup founders and employees, as well as community business leaders who have been in their shoes and have opportunities for engagement and support. That kind of synergy is key, because those high-energy conversations often lead to collaboration and resource sharing that lifts up not just those endeavors, but the overall entrepreneurial community as well.

Hatch is also fun. Anyone who’s ever gone after funding knows that it can be a nerve-wracking experience. By pitching in a social, supportive environment, startup founders can hone their presentation skills and learn how to craft more effective messaging by watching their counterparts.

“Hatch events work well due to the collaboration and design of the experience. By regionalizing idea pitches and tying them into a statewide platform, it creates an interconnected web of creators and connectors to help ideas come to life,” says Fojut. “They are also community-based from the location to the partners involved and products served.”

All Hatch events are free and open to the public.