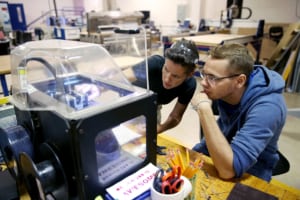 Through UW-Stout’s Idea to Prototype Program, faculty, students and staff were recently able to refine a prototype sound-activated lamp.

Earlier this year WEDC announced that 11 organizations would be awarded a total of $500,000 in grants to help develop or expand innovative programs aimed at advancing the entrepreneurship climate throughout the state. UW-Stout’s Center for Innovation and Development was one of the programs selected and is already benefiting.

The center’s Idea to Prototype Program was able to expand from the Stout area to statewide reach this year with the help of the $50,000 it received from the WEDC.

The Idea to Prototype Program can now also provide inventors from any location in the state with customized resources to advance the commercialization of their products. The grants were awarded as part of WEDC’s Entrepreneurship Support Program, which is now in its second year.

“Entrepreneurs launching successful new ventures are an important ingredient for the prosperity of their communities and the entire state,” said Lt. Governor Rebecca Kleefisch when announcing the grants. 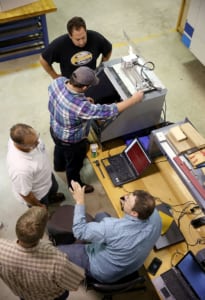 As part of the UW-Stout Idea to Prototype Program, a large effort has been made to enable entrepreneurs by providing equipment orientation.

The annual goal with the grant is to engage with 60 entrepreneurs who have inventions they are interested in developing. Of those, 30 will be chosen to get additional support to develop prototypes and business plans and to investigate intellectual property protections. In addition, of those 30 projects, 15 will receive additional assistance from the Center for Innovation and Development and UW-Stout students and faculty in prototyping, computer-aided design, pilot production runs, patent filing and other areas. The assistance is an ongoing process that runs through December.

One example of work that has benefited from this program is a pair of Baraboo entrepreneurs and their fluid management device for a plumbing application. For that project, the center researched existing products and patents, performed a manufacturability assessment, constructed proof-of-concept prototypes and is moving on to the next step of connecting them with potential manufacturers.

Additionally, a Port Washington entrepreneur’s idea for children’s modular learning kits, where novel parts are pieced together, assembled and/or stacked to stimulate creative learning and problem solving, has been reviewed with the Center for Innovation and Development staff, who have performed research of existing products and patents, assessed manufacturability, constructed a proof-of-concept prototype and connected the entrepreneur with potential manufacturers.

According to an Eau Claire Leader Telegram article, Idea to Prototype was launched in 2015 and is meant to bring inventors’ and entrepreneurs’ concepts to a prototype stage and to evaluate their ideas for feasibility in the market. From there an inventor can take a prototype to interested parties. The 2017 Ideas to Prototype round took on 72 projects with 67 entrepreneurs.