The goal of the Mission Wisconsin initiative is to connect military personnel and families separating from service with the great opportunities Wisconsin has to offer, whether that’s quality education, a fulfilling career, a welcoming community or any support they need as they move into the next phase of their lives.

Like any mission, it couldn’t happen without boots on the ground—the Mission Wisconsin team. We recently talked with Steve Janke, a U.S. Marine Corps veteran who now serves as the Wisconsin Economic Development Corporation’s (WEDC’s) military talent attraction case manager.

Janke grew up near the small town of Westfield, Wisconsin. After realizing college wasn’t working for him, he accompanied a friend to the United States Marine Corps recruiting office. Although he claims the decision to join was made on the spot, he says, “I didn’t want to be one of those people wondering ‘what if?’ What if I had done something when I had the chance? The Marine Corps offered me a chance to do something I would not have been able to do otherwise.”

After transitioning out of the Marines, Janke co-owned and operated his family dairy farm while he put together his civilian transition plan.

“From 2011 to 2014 when I sold the herd, I started volunteering and putting myself in the space where I wanted to be when I was ready to have that next jump. I built my network; I dug my well before I needed water.” 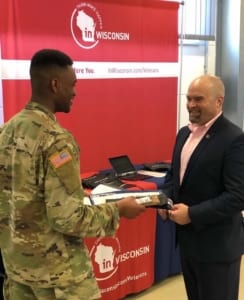 Steve Janke meets with a transitioning service member at a career summit.

Through his network, he was offered a job to build a relationship between the Wisconsin Department of Veterans Affairs and County Veterans Service Officers (CVSO). He transitioned to WEDC in 2019 to continue building relationships, this time with transitioning service members looking for a place to put down roots.

For Janke, sharing his passion for “the great state of Wisconsin,” as he is fond of saying, is more than a job. He jokes that his friends have to remind him he’s off the clock and that they already know how great Wisconsin is—he doesn’t have to sell them on it. He says he can’t help himself.

When asked what he enjoys most about his job, he becomes uncharacteristically quiet, because he can’t think of just one thing.

“Something that everyone in the military understands is taking care of your fellow brothers and sisters in uniform, helping them succeed and meet their goals. Once someone leaves the military, there’s not that support structure, that person they can lean on to help them transition to the civilian world,” he finally responds. “Us providing that support—just being the person they can talk to about it and helping to connect them with what they need—is immensely gratifying.”

A key part of his job is representing Wisconsin at Hiring Our Heroes summits, connecting transitioning service members with everything Wisconsin has to offer—its communities, quality of life, the benefits veterans and their families qualify for. And thanks to WEDC’s network of veteran-ready employers, the career opportunities.

But mostly, he says, “I tell them, ‘Wisconsin values you. Wisconsin’s employers value you. We’re here to help ensure your transition is successful.’”

Janke believes Wisconsin resonates with many veterans because of its work ethic: “Wisconsin is a lot like the military community. We show up to work. We do our jobs. We don’t ‘spike the football.’ And then we do it again the next day. It’s never about me as an individual, it’s about my team. People in the military understand that.”

“The running joke is Wisconsin has a festival for everything. We like to celebrate as a community. It’s never as an individual celebration, it’s saying, ‘this is our community, we’re proud of it.’” He cites Two Rivers, home of the ice cream sundae, as an example. There’s an Ice Cream Sundae festival. And it’s not ‘Two Rivers is great!’ Its ‘we’re celebrating this identity that we have, together.’”

The number one piece of advice Janke gives transitioning service members is to contact their local CVSO. “Our team’s standard operating procedure is ‘if you know they’re coming, and you know where they’re going, your next step after getting them a job is connecting them with their County’s Veterans Service Officer as soon as possible.”

“Other states have veterans service officers, but Wisconsin does it better than almost every other state in the country because we have a county veteran service office in each county. There are 72 CVSO and 11 Tribal Veterans Service Officers—that is a network of 83 strong that is advocating on behalf of veterans and their families.”

Wherever they are in the process, Janke invites transitioning service members and their families to connect with the Mission Wisconsin team.