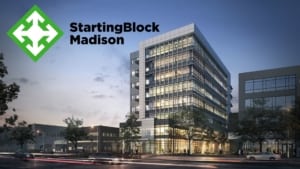 Successful new businesses don’t happen overnight, but rather, with time and effort. The same goes for the entities that support them, as witnessed by the recent opening of StartingBlock, a hub for startups that has opened in the midst of downtown Madison.

Five years ago, several local entrepreneurs, including Troy Vosseller (gener8tor), Forrest Woolworth (Capital Entrepreneurs) and Scott Resnick (Capital Entrepreneurs), came up with the concept behind StartingBlock and set to work bringing their vision to life. The idea was not just to create an incubator, but to provide viable commercial space to young companies as they grow from a single founder or a small team in a co-working space to multiple employees in a suite as large as 6,800 square feet. Often newer companies have challenges leasing space in more traditional commercial developments, where multi-year leases are common. StartingBlock will offer leases that range from month-to-month to three years.

Based on early numbers, they were onto something. StartingBlock has already signed leases with or moved in 15 tenants, taking up much of its 50,000 square feet of space, which is spread over three stories in an eight-story office building dubbed “Spark.” The building is in the final stage of construction on the 800 block of East Washington Avenue.

As it gears up, StartingBlock plans to offer services in four main areas:

By providing space not just for small startups, but for larger—yet still new—companies, StartingBlock is getting a lot of attention from entrepreneurs and companies at different stages of early development. One tenant, 5-year-old ImageMoverMD, has taken 2,000 square feet of space for 15 employees, a move president Darcey Nett told the Wisconsin State Journal was a “huge upgrade” for the company, which operates in the health care space.

StartingBlock will offer everything from flex memberships, or short-term rentals of single desks and other small spaces, all the way up to space for three anchor tenants occupying anywhere from 3,800 to 6,800 square feet. Rents will range from $2,500 to $3,000 a month for a 1,000-square-foot suite, to $150 to $500 a month for smaller pod space.

Lease and square footage figures aside, StartingBlock’s founders say that sharing a common location allows entrepreneurs at every stage to interact with those who are slightly ahead of, or behind, them to brainstorm ideas and solve problems. That will help every company grow and eventually move to new space, freeing up StartingBlock spots for the next generation of startups and early-stage, evolving companies.