It’s no secret that student veterans are set up for success in Wisconsin. But did you know that the University of Wisconsin-Milwaukee has the highest enrollment of military-related students of any school in the Midwest? 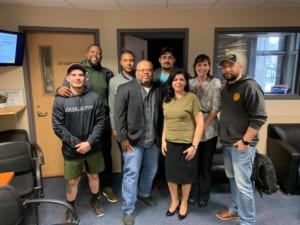 According to UWM data, the school had about 1,400 military-affiliated students enrolled during the 2018-19 school year. That figure includes active duty, reserves, veterans, spouses and children, many of whom used their Wisconsin G.I. Bill benefit to enroll.

While they are enrolled, those students are set up for success by the school’s Military and Veterans Resource Center (MAVRC), which offers things such as transition assistance, career guidance, educational programming, support and much more.

“I can say with complete certainty that everyone who staffs the MAVRC has a servants’ heart,” MAVRC Director Yolanda Medina, a Marine Corps veteran and military spouse, said. “That is evidenced by the long hours spent over on weekends and even holidays so that we can help students enroll, remain in school and graduate. I am privileged to work with such a dedicated group of men and women.”

One of those dedicated MAVRC staff members is James Cocroft, a 20-year Navy veteran who now serves as the assistance director of campus engagement and is often known by his “Groovy” nickname. Cocroft said the MAVRC at UWM was visited 4,690 times through the past year, meaning that thousands of times, students received assistance in applying and enrolling at the school, getting help with the transition from military to civilian life, gaining access to important programs, resources and benefits and more.

“One reward is knowing that we are helping students and their dependents with their transition from military service to civilian life,” Cocroft said. “This work has been therapeutic to me because I am helping people that were in similar situations that I found myself in when I started my transition.”

Medina said that the effect the Wisconsin G.I. Bill benefit has had on its military-affiliated enrollment has been “immeasurable.” With the benefit, full tuition and segregated fees are remitted for eligible veterans and their dependents for up to eight semesters or 128 credits ad any UW System or Wisconsin Technical College System school.

“Not all service members, like myself, qualify for the Post 9/11 GI Bill,” Medina said. “The Wisconsin G.I. Bill fills in that need for many of us. It allows others to go further in attaining advanced degrees in masters and Ph.D. studies.”

The MAVRC also offers a series of yearly events in the community. From a Veterans Ball which kicks off Veterans Week, to a “Serving Those Who Served Brunch,” to the Project 22 Walk/Run/Ride event, there is no shortage of support for the military and veterans within the school.

Medina said UWM’s offerings and support for military-affiliated students is one big attractor. Another, though, is the quality of life in the Milwaukee area.

“I am surprised by the amount of students I have met in MAVRC who are not Wisconsin natives but chose to attend UWM,” she said. “Many expressed the draw that Milwaukee has both the amenities of a big city but also the small-town feel of within the local neighborhoods and communities.”

To learn more about UWM and its support for veterans, active duty military, spouses and their children, click here.