When talking to transitioning service members, the Mission Wisconsin team is frequently asked if the Wreaths Across America Program is active in the state—the answer is yes.

Wreaths Across America ceremonies are held mid-December at Wisconsin’s three state veterans’ cemeteries in King, Union Grove and Spooner, as well as Veterans Park in Saukville and Wood National Cemetery in Milwaukee.

We recently had a chance to talk with Evelyn McSherry, who has been coordinating the annual event at the Central Wisconsin Veterans Memorial Cemetery (CWVMC) in King, Wisconsin for several years. She and her husband Ray, a Mount Horeb native, have lived in Wisconsin for 45 years. Evelyn says Wisconsin’s weather, landscapes and proximity to the Great Lakes often remind her of where she grew up in western New York. 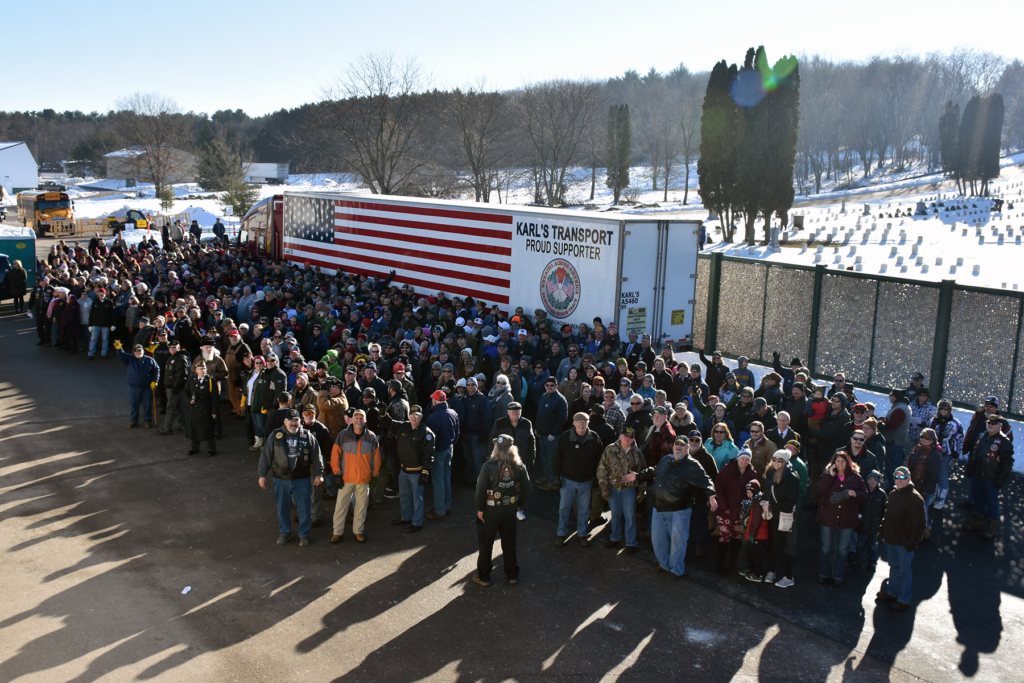 Photo courtesy of Evelyn McSherry, Secretary of District 8 of the Wisconsin branch of the American Legion Riders Association.

In 2012, the District 8 riders were looking for a project to support and chose to take on coordinating Wreaths Across America events for CWVMC. Up until then, CWVMC’s ceremony had been limited to laying seven ceremonial wreaths—one for each branch of the military and Prisoners Of War/Missing In Action—instead of wreaths for each individual solider.

“At first, we didn’t actually understand how many there were. Our first year we started fundraising in November and by December had enough for 450 wreaths,” said Evelyn.

However, the CWVMC has been in operation since 1888, making it a resting place for a total of 7,000 veterans.

“Last year and this year are the first years we’ve been able to cover all 7,000 headstones. That’s our goal—to see every headstone covered with a wreath, so that none of those veterans are forgotten.”

To accomplish that, the District 8 riders, along with local VFW posts and other veterans’ organizations spend much of the year fundraising the money needed for the wreaths through events, cookouts and motorcycle rides. Evelyn notes that many businesses across the state also contribute.

Above all, the McSherrys want Wisconsin’s military families to know that Wisconsin’s veteran community is very active, both when it comes to having fun and supporting each other.

“Whether you’re interested in baseball, hunting and fishing, motorcycling, camping or any variety of things, you’re bound to find a group of veterans and their families that want to share it with you—and maybe raise some money for a cause along the way,” Evelyn said. “As for the American Legion, we’re always looking for younger members with new ideas and new ways to help the veterans in our communities.”

Wreaths Across America coordinates wreath-laying ceremonies each December at more than 1,600 locations across the United States, at sea and abroad. Its roots stem back to 1992, when the owner of a Maine wreath company arranged to have surplus wreaths placed at Arlington National Cemetery. It has since expanded into a national nonprofit with a year-round mission of remembering the fallen, honoring those who serve and teaching the value of freedom.

To find a location close to you or fund wreaths, visit the Wreaths Across America website.