A support staff ready to serve

Elaina Koltz may have transitioned from active duty in 2004, but she continues to serve in her position as financial aid advisor and veteran services coordinator at the University of Wisconsin-Green Bay. After almost 20 years in the U.S. Army and the Wisconsin National Guard, the transition was difficult, she says, but through her work with student veterans, she realized “how blessed [she is] to still be able to assist our local heroes.”

When Koltz became the Department of Veterans Affairs’ certifying official for UW-Green Bay in 2002, there were roughly 65 active duty and veteran students attending the school; today they are more than 500. Although much of this is due to demographics, it’s also a testament to the support veterans receive from the university, and the support veteran students offer to both each other and the larger Green Bay community.

UW-Green Bay will soon be one of the first schools in Wisconsin to partner with the VA’s Vet Success on Campus (VSOC) Program. The goal of VSOC is to help veterans through any issues that are getting in the way of their education, whether it’s on-campus accessibility or off-campus medical care.

Another aspect that makes the university especially attractive to veterans is its Veterans Support Team. Made up of representatives from several university offices, the team conducts an annual survey to collect feedback from service member and veteran students on university services and then works to build on successes and address problems. A few items that have resulted due to the work of the Veterans Support Team are an end-of-year cookout to recognize graduating veterans and a dedicated veteran student lounge.

“A community within a community” 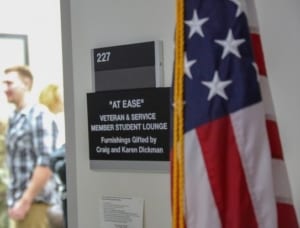 The Veteran and Service Member Student Lounge is the heart of campus for many active duty and veteran students. It’s a bright, comfortable space where they can study or just kick back, with couches, a tv, a refrigerator and several computers. It’s also a place where they can access community resources and provide support to one another.

“It’s a friendly atmosphere, where you know the people there can relate to what you’re talking about,” says Ryan Leurquin, president of the Vets 4 Vets Student Veteran club, which meets regularly in the lounge.

Leurquin landed at UW-Green Bay in 2017 after 11 years in the U.S. Army. Having been posted in Texas, Japan and Saudi Arabia, he knew he wanted to come home to Green Bay but wasn’t sure what would come after that. Once he discovered the Wisconsin GI Bill’s education benefits, he settled on a degree in business administration. Although he originally had his eye on UW-Madison, after talking to a neighbor—who happened to be Elaina Koltz—he realized that Green Bay would be a better fit for him.

“When I took the tour, I noticed a lot of veteran-specific things, like workshops on how to apply for benefits and the veterans’ lounge.”

Now in his third year, Leurquin appreciates the smaller class sizes and attention he receives from professors thanks to UW-Green Bay’s 25 to 1 student-teacher ratio. The campus, he says, is “a small community within a community.”

In addition to casual meetups like bowling, escape rooms and pedal taverns, Vets 4 Vets tries to do one major campus-wide event to raise money for other veterans’ organizations each semester.

“We’ll pretty much do anything we can to support military members or their families here, or wherever they’re serving.”

That includes everything from sending care packages to paying for a local veteran who didn’t qualify for a military burial to be buried at Nicolet Memorial Gardens. The club’s most popular campus event is its partnership with the local Combat Veterans Motorcycle Association to provide free rides around campus to raise money to benefit the local VFW.

“A lot of the organizations we work with donate the money they make from events to different groups instead of keeping it, so we do the same. We all help each other.”

For Leurquin, that generosity is an integral part of Green Bay’s culture: “It doesn’t feel like a city. It feels like a big neighborhood; a small town with a lot of people. Come here if you’re looking for a small town – a small fun town – with a great school.”

As an example, he points to the local American Legion post. In addition to serving as the Green Bay Packers’ color guard since the 1920s, American Legion Post 11 often sets up a tent outside the game to offer free beer and snacks to veterans and service members.

Several Vet 4 Vet students are also members of Bravo Company–N.E.W. Veterans Battalion. The group, launched in 2017 by Rep. Mike Gallagher, matches transitioning service members coming back to Brown County with volunteer veteran sponsors. These sponsors personally reach out to new veterans to provide them with information on local resources, and more importantly, with a personal connection to the community.

“It’s one of those simple ideas, great ideas, where you think, why weren’t we doing this already?” says Koltz, who is currently serving as Bravo Company’s president. “Veterans talk to veterans. There’s a level of trust there, right off the bat.”

In her veteran student services role, Koltz partnered with officials from other area schools last year to host a regional Veterans’ Forum. One of the issues that emerged from that event was the need for caregivers to have a better understanding of veteran health issues. Because of this, next April they will be organizing a summit in April to help area nursing homes, hospice facilities, social workers and nursing students provide veterans with better care.

As for Leurquin, he continues to serve as a member of the Army Reserve. “A lot of the other Reservists are former active duty, so they helped me with the transition. A lot of them are in school too, so they understand what I’m going through now.”

To connect with the N.E.W. Veterans Battalion, visit their website; for more on UW-Green Bay’s veteran’s services, click here.