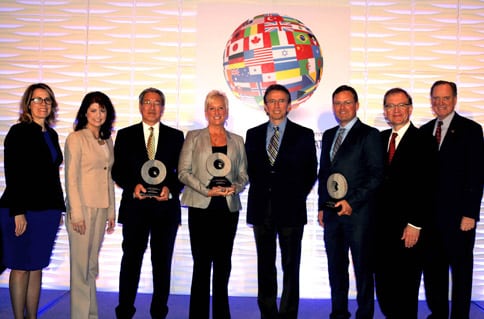 Even in an environment where overall U.S. exports are declining due to a strong dollar, many Wisconsin companies are seeing growth in their exports thanks to wisely crafted export strategies. The Governor’s Export Achievement Awards, presented in May, recognized three of these companies, highlighting their practices as a model for other Wisconsin companies to follow.

“Like many Wisconsin companies, this year’s winners realize they need to look beyond the U.S. borders to capitalize on the demographic shifts that are creating new demand internationally for products and services,” says Mark R. Hogan, secretary and CEO of the Wisconsin Economic Development Corporation (WEDC), which oversees the awards program. “Exporting is no longer a luxury of large global corporations. Small- and midsize companies must be active as well if they want to continue growing, as this year’s winners have demonstrated.”

CMD Corp. of Appleton, CONNOILS LLC of Waukesha, and Lucigen Corp. of Middleton received the honor this year during the 53rd Annual Wisconsin International Trade Conference, held in Milwaukee in May. In the annual awards process, companies are chosen based on their export growth history, contributions to the state’s overall economy, and community engagement. Watch videos about the export award winners here.

Machinery for plastic bags and packages

Founded in 1980, CMD Corp. designs, manufactures and services high-performance converting machinery for the production of plastic bags, pouches and flexible packaging. Its technology is sold to companies that convert plastic film into bags, pouches and flexible packaging and wind plastic film for sheeting. Examples of products that come off its machines include food and beverage pouches, sterile medical device packaging and all varieties of retail trash bags and industrial can liners.

The company currently has equipment installations in 42 countries on six continents, and much of CMD’s recent growth can be attributed to new international business—an increase in exports of 66 percent since 2013. Expansion to southern Europe, the Middle East and Central America is new within the last three years. CMD’s 125,000-square-foot campus in Appleton employs nearly 200 people—up 46 percent since 2013, with additional hires planned in the near future, both domestically and internationally. To achieve this international expansion, CMD has taken advantage of WEDC’s International Market Access Grant Program, using the funds to develop foreign language product information and marketing materials, including trade show exhibits.

Based in Waukesha, CONNOILS LLC offers an extensive line of stabilized conventional and organic oils and custom-made spray-dried and oil powders. Its product line also includes specialty items such as protein powders, lecithins and hydrolyzed collagens. In addition to custom-made private label manufacturing, CONNOILS offers turnkey solutions for formulation needs. Focusing on green technology including solvent- and chemical-free processing, CONNOILS works with conventional and organic oils that are unique forms of omega 3, 6, 7 and 9, minimizing exposure to heat and oxygen, and thus improving the oils’ stability and shelf life. Its extraction process uses supercritical carbon dioxide as a solvent, which allows processing at a low temperature and without contamination.

Lucigen discovers, manufactures and commercializes molecular biology products used across the spectrum from basic research to molecular diagnostics, selling to academic, agricultural, government and pharmaceutical researchers around the world. The products and services developed at Lucigen enable life science professionals to perform their research and testing more efficiently and effectively. The company has grown to manufacture and sell over 130 biomedical research products and services to customers worldwide, and is best known for its high-quality, cost-effective competent cell products, as well as its innovative cloning and next-generation sequencing offerings. Lucigen is a privately held company with 60 employees, manufacturing over 90 percent of its product portfolio in Middleton.

After completing ExporTech™, an export acceleration program administered by the Wisconsin Manufacturing Extension Partnership and funded by WEDC,  the company hired a full-time international business manager in 2013. As part of its export growth strategy, the company has participated in trade ventures with WEDC and the Council of Great Lakes Governors and has engaged the international matchmaking service of the U.S. Commercial Service in Milwaukee. Lucigen exports worldwide, and currently has distribution partners in more than 40 countries. The company’s international sales grew from $1 million in 2015 (already an 11 percent increase from the prior year) to $1.4 million in 2016, representing 13 percent of total company revenue; it has set a goal of growing this figure to 25 percent within the next five years.

As Lucigen has grown, it has made a priority of giving back to the local business community—for example, by sharing lessons learned in exporting, mentoring local students, and participating in career-oriented events with the Madison Metropolitan School District. “By growing revenue in our research division and driving export sales to accelerate this growth, Lucigen is able to fund projects that have a significant impact to the community,” says Glaselyn Miller, director of global sales and distribution.