Wisconsin continues to lead the way in serving our nation’s heroes and their family members.

Not only does the Badger state offer the most benefits to veterans and their families, but it’s the first to begin a collaborative effort to engage with transitioning service members and their spouses and have them call Wisconsin home.

With a goal of bringing those talented service members to Wisconsin to start the next chapter of their lives, a delegation of representatives from those state agencies will be getting directly in front of them and letting them know about the endless opportunities available In Wisconsin.

Deciding where to end up following their time in service is one of the most import decisions military personnel make outside of enlisting in the first place. We want to let them know why Wisconsin’s exceptional quality of life, in addition to a deep-rooted veterans community and boundless resources, is a perfect fit.

The Wisconsin team begins their mission Aug. 29 with a trip to Camp Pendleton, Calif. There, they will have a prominent presence at a Hiring Our Heroes Transition Summit. The summits are events organized across the nation by the U.S. Chamber of Commerce Foundation to help veterans, transitioning service members and their spouses find meaningful employment. And there’s certainly no shortage of those openings in Wisconsin.

We will be reaching that audience in a variety of unique ways. Day one of the Camp Pendleton summit begins at 11:30 a.m. PT with a hiring fair, representing our first chance to make a lasting impression on why Wisconsin is more you. The day ends with a networking reception with service members, their spouses and veterans. The second day of the summit starts at 8:30 a.m. PT with multiple speakers, in addition to several interactive workshops followed by a second job fair. Wisconsin will have a large booth set up at the events and be stationed alongside global companies such as Amazon, Starbucks, Microsoft, Boeing, Lockheed Martin and Oshkosh Corporation. 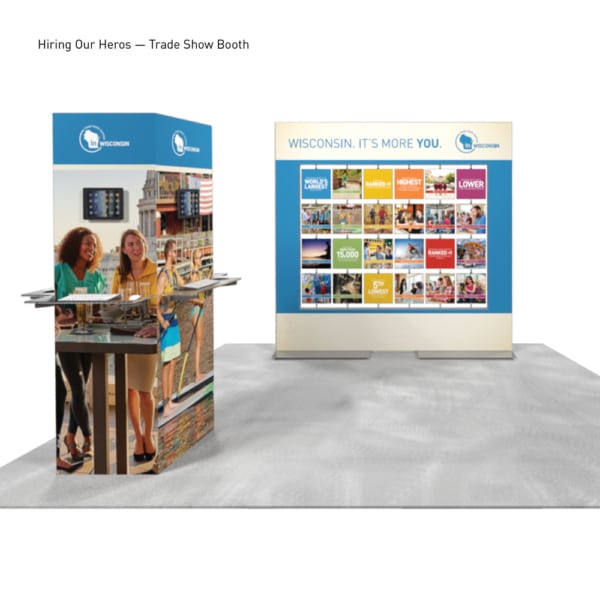 A rendering of the THINK-MAKE-HAPPEN IN WISCONSIN veterans talent attraction traveling exhibit.

With several ambassadors welcoming summit attendees, they will leave knowing why Wisconsin is the best place for them and their family to live, study, begin a career and unwind.

The Camp Pendleton stop is one of a few scheduled through the rest of the year. Check below to see the tentative schedule: