Not only do Wisconsin’s benefits, programs and initiatives for veterans and families surpass any other state’s, but the support Wisconsin offers to its veterans’ community is among the highest in the nation. This commitment to military veterans in Wisconsin includes specific attention given to the state’s extensive Native American veteran population.

According to data from the U.S. Department of Defense, there are roughly 140,000 Native American veterans living in the U.S. Of that number, about 2.5 percent—3,500 Native Americans—call Wisconsin home. These veterans receive dedicated support and representation from the Wisconsin Department of Veterans Affairs (WDVA). WDVA’s tribal liaison works to help tribal veterans succeed within their communities and builds a network of support among the state’s 11 tribes. In addition to working with the state’s Native American communities, WDVA Tribal Liaison Shaun Stoeger focuses on strengthening an alliance with the more than 2,000 Hmong veterans living in Wisconsin.

A tireless advocate for Native American representation, Stoeger views his role serving Wisconsin’s tribes as more than a job. “I tell my boss that I’ve never worked a single day since I’ve been at WDVA,” he said. “I love my job, and I’ve never really had that feeling before.” 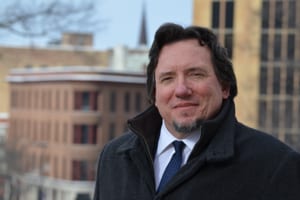 “I help the TVSOs and give them what they need and acquaint them with any changes in benefits or eligibility requirements,” Stoeger said. “I help them with whatever questions they may have, and I also help connect them to a lot of resources they don’t know about.”

Many Native American veterans are eligible for a wide range of benefits through the U.S. Department of Veterans Affairs, including disability compensation, pension, education, job training, home loans, employment and more. For more information on what Wisconsin offers its veterans, visit InWisconsin.com/veterans.